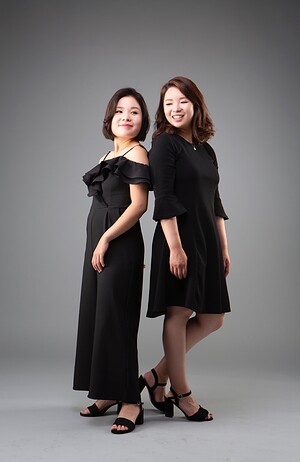 In a musical world which includes family ensembles - the Hagen Quartet (sibling sisters and brothers); the Eggner Trio (brothers); the Cousin Ouartet (cousins who won Musica Viva Australia's 2020 Strike a Chord Competition) - it is no surprise to discover musically talented Australian-Korean sisters Lisa Sung and Sarah Sung. That both are violists midway through studies at prestigious music schools in the USA adds to their story. That both have spent the year of COVID captive but busy in their hometown Sydney adds intrigue.

High school years as music scholarship students at Sydney's MLC School, under the guidance of then Director of Music, Mrs Karen Carey and Head of Strings Louise Keller, were complemented by violin then viola studies with eminent violist-teacher Alex Todicescu (a laureate of the ANZVS Roll of Honour). The sisters' successes included winning the Ku-ring-gai Philharmonic Orchestra's Secondary Schools Concerto Competition double concerto section in 2010, playing the Wranitzky Concerto for two violas. In later years elder sister Lisa twice won the solo Senior Section of the KPO competition - with Bartok in 2012 and Walton in 2013.

Further mentoring from Sydney Symphony Co-Principal Viola Tobias Breider preceded Lisa's entry into New York's Juilliard School undergraduate program as the proud recipient of the inaugural Kovner Fellowship, studying with Paul Neubauer and, later, at the Masters level, with Neubauer and also Cynthia Phelps, the Principal Viola of the New York Philharmonic. Highlights for Lisa have included a solo performance and chamber recitals in Alice Tully Hall and serving as Principal Viola of the Juilliard Orchestra. Studies were balanced by performances within the New York Philharmonic and Saint Paul Chamber Orchestra and successes as a laureate of the Lionel Tertis (2016), Manhattan (2017) and Vienna (2019) international music competitions.

Sarah completed her high school studies at MLC before also venturing to Juilliard on a full scholarship, maintaining family tradition in undergraduate studies with Neubauer, also with Phelps at postgraduate level and serving as Principal Viola of the Juilliard Orchestra. COVID disruptions resulted in a mid-2020 break in Sydney becoming a gap year, with Sarah's Masters now due for completion in May 2022.

Months captive in Sydney through 2020 have proved fruitful. Lisa has maintained a considerable teaching schedule, including for her alma mater MLC School, other leading schools (Abbotsleigh, King's), tutorials for Sydney Youth Orchestra plus online teaching to the US with the Virtu.Academy.

A performance highlight has been Lisa's first tour as a guest member of the Australian Chamber Orchestra in March 2021 — hopefully a precursor to similar collaborations during likely home visits during northern summers. Sarah has been teaching full-time at Sydney Catholic Schools and in a private studio. Awaiting her return to the US in September she is also developing the Vision Collective, of which Sarah is Co-Founder with eminent Juilliard colleague alumni, their goal being the sharing of music to refugee communities.

Lisa has been invited to the Krzyzowa Chamber Music Festival in Poland in August and has been specially selected to join Krzyzowa on Tour to Germany in September - COVID permitting. On her return to the US in September Lisa has accepted a Dean's scholarship for a Graduate Diploma at the New England Conservatory in Boston, studying with Kim Kashkashian - a program flexible enough to allow further professional performances. Lisa's present career goal is chamber music - her greatest musical passion -- while maintaining positions with major orchestras.

Favourite works? For Lisa -- Bach's Brandenburg Concerto No. 6 and Scriabin's Piano Concerto in f sharp minor, which Lisa played with the New York Philharmonic and soloist Daniil Trifonov in late 2019. For Sarah - the passionate sonatas of Hindemith and Bax, with a special interest in contemporary styles.

Their common interest in teaching and community outreach programs has found both Lisa and Sarah dedicated to over fifteen years and over 300 community performances for those in need, initially in Sydney, later internationally. Their ongoing hopes and plans await the vicissitudes of COVID and global travel.