Back to List
News
New York Times: Deconstructing the Whole to Reveal the Sum of Its Parts
Tweet 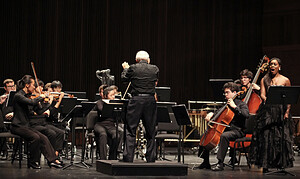 An orchestra is like an organism, people say when they want to illustrate the tightness and unity of a group’s playing. But on Saturday evening at the Juilliard School, the New Juilliard Ensemble’s performance of Harrison Birtwistle’s “Cantus Iambeus” (2005) was a reminder that an organism is hardly a unified thing.

Think of the human body. Do nerve impulses move at the same speed as digestion? Do the inhalations and exhalations of your breathing match your pulse rate?

Of course not. In this way, “Cantus Iambeus,” which fragments its players into various components, each moving at its own pace and yet somehow all hanging together as a whole, behaved more like a real organism than, say, a taut Sousa march.

That the performance of the work, given in honor of Mr. Birtwistle’s 80th birthday in July, was its New York premiere speaks to the vital role that the New Juilliard Ensemble and its founder and conductor, Joel Sachs, have carved out in the city’s music scene. While “Cantus Iambeus,” brief and larky, is hardly a major addition to its composer’s oeuvre, it is not every college orchestra, even at a prestigious conservatory, that has the vision and reputation to introduce a piece by such a prominent artist.

The first moments captured its quicksilver entirety: a struck chord that briefly plodded before suddenly skipping ahead. Throughout, you were never quite on firm ground amid fairy-tale airiness and translucent colors.

While the Birtwistle premiere was the most prominent event on Saturday’s program, which consisted entirely of works from the last decade, it was hardly the only music of value. The first half of the concert was particularly strong, featuring the American premiere of Bernd Franke’s “Veil (I)” (2013) and a poised, lucid performance of Shulamit Ran’s “Fault Line” (2006).

Mr. Franke’s piece begins with the alternation of lush, leisurely, almost jazzy passages on two pianos with soft, quivery writing for the other players, a combination that felt Straussian in its bountiful exuberance. Evidently “Veil (I)” includes some sections that are fully composed and others that are less predetermined, and while the playing all sounded polished, there was also a sense of bluesy freedom.

“Fault Line” opened in a similar vein, contrasting plangent melodic fragments with quivering surroundings. Ms. Ran passes musical lines through the ensemble so artfully that it can be difficult to tell where one instrument ends and the next begins.

The voice of the soprano Onadek Winan, a Juilliard undergraduate, emerged from dark, low strings and shudders of timpani, and she sang with clear, penetrating tone in a part that blurs a line from Shakespeare’s “Othello” with wordless vocalise. The work ended with a grand crescendo, capped by cymbals, that quickly receded, leaving only the sound of Ms. Winan exhaling and gently hissing.